I do actually have a wonderful relationship with Ruby, my 3 year old boxer.  She’s an amazing dog and I love her to pieces.  We’ve had our training challenges that’s for sure, but who doesn’t?  So, the one area that I continue to work on with Ruby is her over arousal to other dogs.  It’s not all dogs, but certain ones.  AND,  it’s most apparent when we’re walking.  She sees another dog and that’s it!  The world as we know it disappears and her entire focus is getting to that dog to play.  We’ve been working on it and we’ve made such tremendous progress!  Then I felt like we plateaued.  Like we weren’t getting anywhere anymore.   What happened I wondered?

So one day I decided to take a class with her.  We didn’t have our AKC Canine Good Citizen title yet, so what the heck?  Let’s give it a shot.  I didn’t do it for a ribbon or a medal or anything like that.  For those that know me, they know I couldn’t care less about those things.  And Ruby, well, if she can’t play with it or eat it, it’s of no use to her!  Anyway, off we went to class!  And, wow, she over aroused with the other dogs around, I couldn’t get her attention and I had hot dogs!  Poor Ruby, she was all over the place and I couldn’t help her.  I thought to myself, boy we have work to do.  We had taken classes before, but she was never like this.  So, as the weeks went by, we worked and played training games and our classroom sessions improved.  At the end of six weeks, we earned our CGC title.  Ruby did a wonderful job and I was so proud of her!

Shortly after that, Ruby and I were walking in our neighborhood and, as always, there were others walking their dogs as well.  Typically, when I see another dog, I engage Ruby in a series of games in order to distract her and keep her attention.  Those games usually do the trick, but as of late they were only working half the time.  So along we went and much to my surprise, and frankly shock, she was attentive to me the entire time the dog was passing.  Hmmm that’s interesting I thought.  Usually she’s attentive then just starts pulling to get to the other dog.  Okay, I’ll take it!  But the next day, it happened again.  And the next day too.  And before I knew it, we were having an easier time walking by other dogs.  Then today, we were walking along and suddenly we were surrounded on all sides by people walking their dogs.  In a subdivision, it’s easy to get trapped!  The last time this happened, it was a disaster – let’s just leave it at that!  I engaged her in the games we play and, again, Ruby was ready and attentive and we played as dogs barked at us, walked by, sat down, stared and even charged toward us on a retractable leash.   All the while, Ruby and I played our games.  She’d look at them, lie down, stare (she’s a boxer – that’s what they do!).  BUT there was no carrying on, no lunging, no pulling, no whining.  No nothing!  A breakthrough I thought!  YES, finally!  A breakthrough!

Friends, it was no breakthrough.  It was the result of spending time with my dog in a class and building and nurturing the relationship I had started to take for granted.  It is as simple as that.  We joked that Ruby knew she was a CGC now and had to be on her best behavior!  But let’s face it, Ruby doesn’t know she has a CGC title!  What Ruby knows is that we went somewhere and we had fun and after that class, we kept having fun and doing things together.   As I thought about it after we got home from our walk, it made me sad that I wasn’t giving her what she needed.  With 2 older special needs dogs, my time, energy and effort went to them.  And Miss Ruby got pushed into 3rd place — a challenge many of us with mulit-dog households face.

For us, all it took was a class to get the ball rolling again; to get reconnected; to appreciate the time we spend together; and to have fun.  For Ruby, it made all the difference in the world.  For me, wow, what a smack upside the head!  My advice to all you dog owners – go out and take a class.  I don’t care what the class is, just take it.  Learn one thing or nothing – it doesn’t matter.  What matters is doing something with your dog – just you and her (or him!).

At 52 years of age, I am still learning life lessons.  And this old girl learned a VERY important one from her dog.  So, thank you to my sweet Ruby for your grace, for your patience, and for taking the time to remind me that that you have to pay attention to your friends and you have to nurture those relationships every, single day.  Love you baby girl.  Now let’s play hose game! 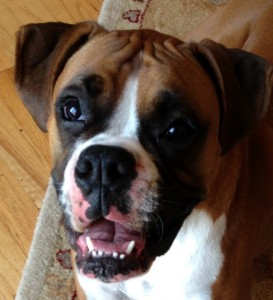 A lot of folks tell me their dog is aggressive to other dogs when walking and why does that happen and can that be “fixed” and how long will it take and how much will it cost.  Every time I hear the questions, I think about my own experience with my boy Doc, now 14 1/2 years young.  As I was walking him this morning and he calmly passed dog after dog, on and off leash, I remembered his humble beginnings.  We adopted Doc when he was 8 years old.  We were his 4th home.  He came to us from a rescue group with:  1)  1 toe missing from a snake bite, 2) an extreme dislike of other dogs, and 3)  an even more extreme dislike of anyone that got too close to him, especially to his head.  I’ll say right now that I’ll take a senior dog with a few issues over a puppy any day!  But, that’s a topic for a different post!  Back to the questions! END_OF_DOCUMENT_TOKEN_TO_BE_REPLACED

Stay tuned friends . . . we’re coming out with a whole new set of classes!

Oh what fun we have at K9K Day Camp! If your dog loves other dogs, ask us how to sign them up! To see all videos, visit our YouTube channel here.